The brain has its own garbage disposal: microglial cells, as the immune cells of the brain are called, remove waste material. But they fail with Alzheimer's disease. The relationship between microglial cells and the most common form of dementia is investigated by Dr. Gaye Tanriöver from the University Hospital Tübingen and Prof. Mathias Jucker's Department of Cellular Neurology at the HIH. The two-year research project is funded by the Helga Steinle Prize of the non-profit Alzheimer Research Initiative e.V. (AFI) endowed with 30,000 euros. In addition, AFI is supporting the project with a further 20,000 euros.

More Information (in German only) 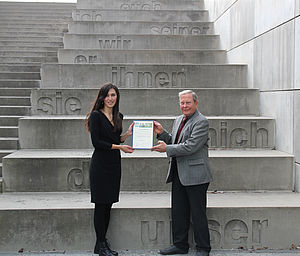 left in the picture: Dr. Gaye Tanriöver, on the right: Dieter Steinle (AFI)